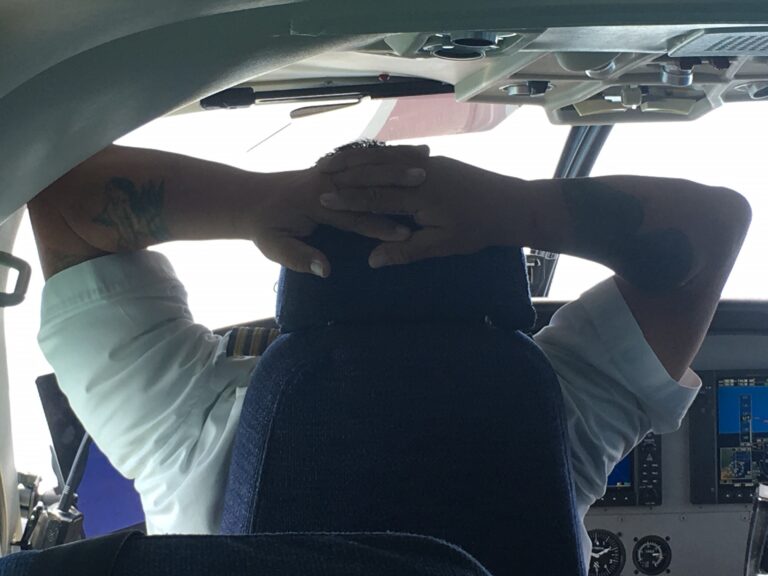 Travelling in Latin America is dangerous for sure!

When travelling in Latin America, I underestimated how dangerous it was, things had changed somewhat since backpacking around the world in my 20’s.

I caught a bus at 4am to the frontier, then a cab to the border. Walking into the passport office was an interesting experience, it was like something out of a gangster movie, a cross between a movie about Pablo Escobar and Sons of Anarchy.

Listen to my true story or read the blog below:-

I was greeted by a rather large man with a scar on his face, he smiled a lot and was wearing a yellow T-Shirt with pictures of guns over it (he is in the picture below on the boat as he turned out to be the captain). He was seated at the front desk in the passport office and kept grinning as if he owned the place. His personal brand was something he embraced and not someone anyone talked about, it was just who he was and everyone new not to bother him…

I paid my $30 USD to the government official sitting at one of the other desks, they looked at my British passport and were friendly, almost too friendly. There were about 5 people sitting at desks in the room and they all seemed very friendly, probably because I was speaking a little Spanish to them, despite me being a gringo.

The big man who was wearing the T-Shirt was very polite, but moody looking by now. He introduced me to his brother who seemed to have borrowed his grin, it was like a game they were playing of pass the grin. We exchanged a few words in Spanish and he then led me to the dock; where I gave him $20 for my ticket to cross the border, he didn’t have any change so told me to hang on the other $10 until we arrived across the border.

Another young man showed up in a car that had fully tinted windows; they were so dark you couldn’t see anything. He then proceeded to blast the fake police siren and grab a couple of bags from a rather moody looking man with gold teeth.

This was not a safe place, this was not even a remotely safe place, it was the sort of place you could end up disappearing, to never be seen again! Life is cheap in these areas, if you die no one cares and no one will waste their time on you. Life is hard here if you make it, if you embrace what you have to do and just relax then the days pass by with ease.

I bought a couple of small little bags of water and a small snack and waited patiently for the boat to arrive.

Another man showed up, I guessed he was the father of the two men who ran the boats, he looked like an actor from Sons of Anarchy who plays the Latino pimp. He was wearing blue jeans and a blue denim shirt, yes shocker double denim! But with his cowboy boots it suited him, he smiled continually and like the younger brother was very friendly.

We got onto the boat finally, there were about 14 of us in total and lots of luggage. The other passengers had samples of products they were selling so the boat was packed.

We were all settling in and a general from the army showed up to check the papers. The father of the two men spoke to him, the general said “papeles por favour” meaning papers please. The gentleman handed him a booklet with our nationalities in and names and he smiled rather corruptly and they both exchanged some sort of cheeky look and a handshake. The soldier with him lowered his massive automatic weapon, turned around and escorted him back the way he had come.

We then set-off on our boat journey, the scenery was beautiful, rain-forest either side of the boat; as you would expect, lots of amazing wildlife and I felt strangely safe…

We continued on our journey, to the other side of the border and finally arrived at the dock. The dock was white, it was about 100 feet long and had a little office and a few people waiting to carry your bags if you so desired.

Then we went through immigration, it was a much bigger area than the little office on the other side.

After the boat had moored up, the big man with pictures of guns on his T-Shirt got up and moved toward the glass screen where I was waiting, he just walked past it and said a few quiet words in Spanish to the customs and immigration officials ahead and just looked at them as if to say “you mess with me and you are dead.”

This was a blatant show of force, it was a show of dominance and a sort of statement saying to the officials that they were dead if they messed with him and the army who were backing him up.

The army of the country I had left has about 200 times more soldiers than the country I was now in, things were edgy because one had been shot just the week before; they had good reason to be scared, the corruption went all the way up the food chain!

Common sense obviously prevailed for me; I decided to fly in the future. When crossing borders I found myself not only feeling safe but having a superb time in Latin America.

So make sure if you are planning on Traveling around Latin America that you fly across the borders, it is much safer and actually pretty reasonably priced.

In addition, make sure you don’t flash your wealth and ensure you remember some of your emergency numbers just in case you lose everything!

If you are interested in using your travels to build your personal brand or your business brand then please contact me directly: nat@natschooler.com