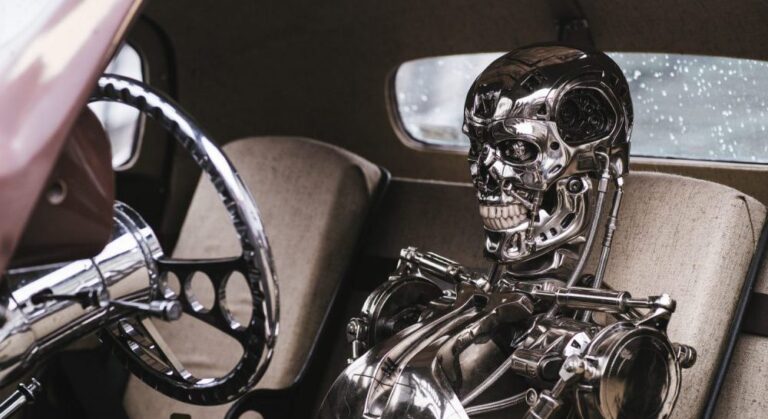 The Rise Of AI First Businesses and Why You Shouldn’t Worry?

The concept of artificial intelligence or machine learning has been around since before computers were even invented, but AI-first businesses are another story…

Pioneers have thought about the use of machines for hundreds of years and how they could solve mathematical problems and become helpful to man by doing other more complex tasks.

Since Mary Shelley wrote Frankenstein in 1818, people knew that this day will come…there were films like The Terminator and The Film Short Circuit, which was more of a comedy, but actually highlights some real risks.

What are the main points of conversations around AI

We have all heard Elon Musk, Stephan Hawking, Bill Gates and others are scared that AI robots will take over the world. They have valid points and it is lucky that they have made machine learning so high-profile, this is great for a number of reasons.

Who is talking about AI

Whatever you want to call it AI, Machine Learning, Cognitive computing, Artificial Intelligence is now ingrained into our lives. Businesses used to talk about being “digital first” or “social first” or “mobile first” well now we ALL should be thinking “AI first!”

This article contains a brief overview of artificial intelligence and some insights around the use of the term online. There are many people who are discussing AI in and around Europe. We have utilized some serious social media and content listening tools around the general terms related.

Before we delve into the research it is important to understand that AI systems should be integrated into your business anywhere and everywhere there is data, becoming AI first is key to succeeding.

“The study of mechanical or “formal” reasoning began with philosophers and mathematicians in antiquity. The study of mathematical logic led directly to Alan Turing‘s theory of computation, which suggested that a machine, by shuffling symbols as simple as “0” and “1”, could simulate any conceivable act of mathematical deduction. This insight, that digital computers can simulate any process of formal reasoning, is known as the Church–Turing thesis. Along with concurrent discoveries in neurology, information theoryand cybernetics, this led researchers to consider the possibility of building an electronic brain. The first work that is now generally recognized as AI was McCullouch and Pitts‘ 1943 formal design for Turing-complete “artificial neurons”.

The field of AI research was born at a workshop at Dartmouth College in 1956.[ Attendees Allen Newell (CMU), Herbert Simon (CMU), John McCarthy (MIT), Marvin Minsky (MIT) and Arthur Samuel (IBM) became the founders and leaders of AI research. They and their students produced programs that the press described as “astonishing”: computers were winning at checkers, solving word problems in algebra, proving logical theorems and speaking English. By the middle of the 1960s, research in the U.S. was heavily funded by the Department of Defense and laboratories had been established around the world. AI’s founders were optimistic about the future: Herbert Simon predicted, “machines will be capable, within twenty years, of doing any work a man can do”. Marvin Minsky agreed, writing, “within a generation… the problem of creating ‘artificial intelligence’ will substantially be solved”.

In a recent report from Forrester they forecast that cognitive technologies such as robots, artificial intelligence, machine learning, and automation will replace 7% of US jobs by 2025.

Key data points from the report include:

Office and administrative support staff will be the most rapidly disrupted.

The cognitive era will create new jobs, such as robot monitoring professionals, data scientists, automation specialists, and content curators: Forrester forecasts 8.9 million new jobs in the US by 2025.

93% of automation technologists feel unprepared or only partially prepared to tackle the challenges associated with smart machine technologies.

There is a lot of confusion around AI in general, firstly the term itself and then the kind of opportunities and changes that will occur and have occurred as a bi product of the efficiencies, improvements and cost reductions for businesses.

There are many companies that are thinking about using AI within their businesses, the problem is they are not thinking big enough to reflect the changes they could implement. Donald Trump managed to get into power thanks to cognitive marketing, this is powered by AI. Brexit occurred in much the same way.

Businesses are being squeezed on margins by more agile, tech savvy, forward thinking competitors. If these businesses don’t act quickly to get with the AI solution program they will not be in business for much longer.

Their competitors are using AI systems at every step within these forward thinking businesses. If you as a business leader and are not taking action I would start now. The corporation you are involved with need to get with the AI program as soon as possible! If not you should probably start looking for a new job.

According to fellow IBM futurist and one of my trusted advisors and associates Stephen Monaco, “chances are, your company is among 80+ % that admittedly lacks the digital maturity and is in need of a digital transformation.”

Business leaders such as Branson, Musk, Zuckerberg and others are talking about AI. Most countries on earth could afford to provide a minimum basic income for unemployed people, the people could focus on building their self-esteem. Becoming more creative, thus making the world a better place and bringing a new wave of entrepreneurs and interesting ideas.

There are trials happening with minimum basic income right now and by the beginning of next year we will have some serious data and feedback to review before the roll-out…The experiments that are taking place with it are very interesting. Here is an article where Richard Branson discusses the points around it.

Some of the positive outputs from AI

There are many pros around AI, it has the potential to cure many diseases and to assist in reducing food wastage. It can create an easier life for people, it can enable us to work on things that we enjoy; versus things that we have to do at work which we don’t like so much. It has and will continue to reduce fraud.

Machine learning or AI is being used by many government organisations around the world to assist people to remain safe when travelling or out and about on a night out in their local towns. It analyses videos and can recognize criminals and criminal behaviour patterns long before unknown criminals actually commit a crime. It is already being used at many airports to aid the security and in many police security camera systems to prevent crimes and to monitor criminals.

AI has been used for a long time by companies like Amazon, eBay, Netflix and others to enable us to find the product or film we are looking for before we even knew we wanted it.

AI is helping us to connect with people that have similar likes to us; social media enables us to find people with similar interests and tastes.

Some of the negatives of AI

AI is making us less intelligent, it is enabling us to rely on search engines like Google to provide us with answers to questions that we would normally remember; but as we have become lazy we have chosen to not remember the answers as we know we can rely on our digital assistants.

AI is also enabling social media platforms to control our attention and feast upon our data to advertise products and services that fit our personas.

Yes there are job disruptions as in Hitachi’s test case back in October 2015, they used a robot warehouse manager, work efficiency increased by 8% by using artificial intelligence.

I was worried about jobs and being displaced by robots but after reading The Second Machine, Work, Progress, and Prosperity in a Time of Brilliant Technologies. Written by MIT’s Erik Brynjolfsson and Andrew McAfee.

This book will alleviate any fears people may have and gives them a heavy dose of reality!

I realized a few home truths, people who are adaptable will be OK; people with a can do attitude and having people skills and real specialist skills will always be in demand.

It is nothing new, we had the industrial revolution, we had the machine age where mass production was organised and structured and machines were used to complete manual jobs that humans previously did.

We are still in the second machine age, despite people talking about the third and fourth machine age.

We are now in an “AI first” business world, businesses that do not have an AI focused strategy or plan will be the ones that are more than likely to get displaced. They are the ones that will have substantially higher costs than their more efficient competitor.

This blog was written in collaboration with Ehsan Khodarahmi

Please contact me or Ehsan if you would like us to provide some insight into your brand or market, as we are not only able to write great content, but to put social listening tools together to create powerful market insights for you or your clients.