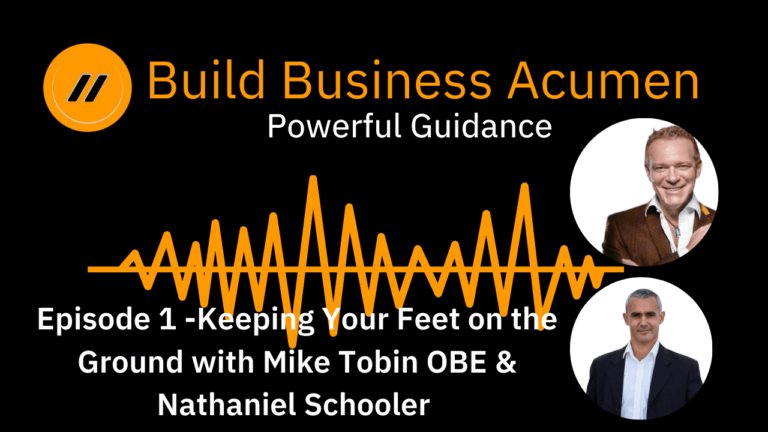 Mike was CEO of Telecity, from a market cap of 6 Million to well over 3 Billion…

Mike received an OBE (Order of the British Empire) with recognition from Her Majesty The Queen for his contribution to the UK digital economy. Personal branding was synonymous with success!

In his business life, Mike was CEO of Telecity, a company he helped successfully from a market cap of 6 Million to well over 3 Billion.

Growing the company was quite a journey, with several acquisitions along the way. Mike tells me about his personal brand how it helped him along the way and how it is longer-lived than a business brand.

Mike also enjoys charity work and is passionate about the education and empowerment of children in particular.

He ran 40 Marathons in 40 days for the Prince’s trust 4oth anniversary. He also sleeps in the street once a year to support action for children, an initiative to get children off the streets.

When he was a CEO he wrote a book called “Forget Strategy Get Results” as a public company CEO the shareholders loved the book of course! He has his second book coming along in the next few months.

In terms of personal branding helping him in his career, it was incredible for him personally and synonymous with the businesses success. He had a caricature of himself on a business card and through an app called Blippar his character would pop up and start talking to you through your phone.

It had an image of him with his shirt open three buttons down, he still wears the same necklace today. Another one of his business cards had Mike on it and if you needed any more information he probably didn’t want to speak to you anyway!

When presenting the results for the company people would ask
if his shirt buttons were done up or open and not even attend the briefing. He would leave the three buttons undone if the results were good and only one was open if they were not as good.

Learn how to become an entrepreneur here.

Personal Branding is All About Personality

We agreed personal branding is about personality and how that plays into the businesses he is involved with is crucial.

When Mike learnt how to sell the gentleman that taught him explained that every unsuccessful attempt only gets you one step closer to success.

When you are a vacuum cleaner salesperson statistically you know that not all the houses in the street will buy, and the likelihood of success is low.

When you knock on that door you should be happy as you are one step closer to selling the vacuum cleaner.

Failure is almost part of success and you should embrace it as it is part of the journey.

Nelson Mandella is a great inspiration to Mike but his home life was a disaster and trying to be focused on your career and having a home life and a business life you need to integrate them somehow otherwise one element suffers.

Mike puts his mobile on the table every time he goes to dinner and some people think this is rude, but he has businesses in every timezone in the world and if his phone is on the table at least he can see it when it rings.

He thinks this is better than putting the phone in the briefcase as it wastes brain cycles thinking about what could be happening to the phone in his bag.

We need to integrate technology into our lives and make it easier instead of making our lives tougher. Mike left his laptop on an airplane and the aircraft was different so it confused him, it was like a first-class long haul on a 40-minute flight which was weird and not his usual routine.

Obviously being in a rush to make Valentine’s day dinner with
his wife he lost his laptop and no one owned up to it in lost and found.

So when was the last time it was backed up, unfortunately, October last year and fortunately he had all the emails with attachments. We both agreed the biggest lessons come from the most pain, we also agreed that learning from others experiences are best, but the messages don’t get through until we sometimes make a painful mistake!

Get Involved In Giving Back

Being involved with a superb children’s charity is very rewarding for him and does keep his feet on the ground! Mike sleeps out once a year raising money for action with children, he pioneered the CEO sleepout, sleeping in front of the London stock exchange they raise over 100K in one night.

For homeless children in the UK and this is to get the children back off the streets and keep them away from drugs and prostitution.

One of the guys complained about how cold it was and uncomfortable it was and said he understood how awful it was and Mike reminded him that he could go home and how the kids don’t sleep at night because they are afraid of being out attacked or robbed and have no idea when they will get a bed to sleep in for the night.

Getting hooked on drugs and alcohol and not knowing where they sleep is awful, but action for children is helping them out.

Mike is also involved heavily with the Prince’s Trust, which also helps people to get ahead in life when Mike was young his dad was in Jail and he loves to help people by giving back and helping people in life and he is aware that it could of gone the other way for him.

Personal Branding is Key When Working For Yourself or Someone Else

Some people are not destined to work for themselves and it is difficult to make a decision in life to decide what you want to do. Working out what you want to do and make the break or getting a job is difficult for them to decide. Making that decision is not easy, getting a job is a necessity for an income, for self respect and self worthiness and giving people the ability to build this is important and key is to have a choice in life.

Mike is planning another major charitable event and it is still a secret at the moment but he did run 40 marathons in 40 days last year and now he doesn’t run for a bus these days or want to replicate this again!

Exciting Projects on The Go

He is involved with a number of very exciting projects UltraHaptics which is about pairing with VR and giving you physical feedback mid-air and this will be part of the new wave of technology to come.

The South African business is going really well for him and he is enjoying the luxury of having businesses indifferent places and he visits Madrid regularly and combines these business interests with the book and charity events makes it a busy time for Mike.

Help Yourself So You Can Help Others

When becoming self-sufficient you can give back in life and help people. Like being on an airplane they give you an oxygen mask and it is always important to fit your own mask before you fit someone else’s. Without oxygen, we are not able to help other people get fitted so they can catch their breath. If we can be self sufficient and help everyone, this is the basis of true socialism.

Keep your feet on the ground. Remember success is not permanent and you need to continue to work and create value.

Personal branding is fundamental and both Nat and Mike agreed that building personal branding alongside your business brand is key. You can learn more about that here in the The Ultimate Guide To Personal Branding To Win

Up until halfway through his Telecity days Mike realized he was the symbol of the company and this started him on the road to creating the personal brand and this became more of a focus than the business brand.

We look forward to having him on the show regularly as he has so much value to add and a personal brand that is consistent and authentic!

Thanks to Garin Kilpatrick from Next Level Podcast in putting the edits in place to this original post on there.