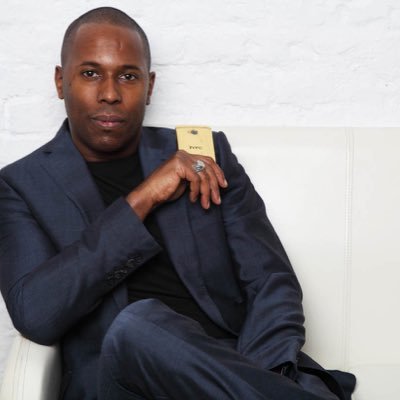 A pleasure to have Laban on this podcast! I spotted him on television doing an interview about being an entrepreneur and remembered when he was on Dragons Den in 2007, James Caan invested in his business.

Goldgenie is a British company which provides gold-plating and other decoration for mobile phones and other objects.[1] In 2007 it appeared on the appeared on the Dragons’ Den television programme, and received an investment from James Caan.[2] In 2009 it decorated iPod nanos with lead crystal to be sold in aid of the Elton John AIDS Foundation.[3] In 2014, it marketed a 24-carat gold-plated bicycle at $390,000; a version with embedded diamonds was also available for $470,000.[4]

They are pioneers of what they do, he started by developing a prototype in the early days and plating items using 24K gold.

Laban initially built his business by knocking on people’s doors asking if they would like their items to be gold plated, he developed a huge business gold plating things like body piercings, jewellery and even bathroom taps.

Laban wrote a letter to a Lexus dealership and asked if he could gold plate their car emblems, he said he was passing in the area. As he was gold plating emblems for demo cars in the showroom other managers who were there for a conference at the Lexus Barbican at exactly the same time and overnight he started working for the entire Lexus UK group.

“Gifts for the ungiftable” is their tagline, these gifts are for people that have everything and they want to immortalise their belongings, they now have franchises around the world, they recently sold a franchise to a member of the Saudi Arabian royal family.

How Do You Think Personal Branding Has Helped You Along the Way?
“It means everything and the very little money that I make I decided to dedicate a proportion to create a great website and logo and everything that came along with having a brand, he did everything to tell his customers to be that he was a big company.”

He worked from home for 15 years from his kitchen table and a tent in his garden.

He was told a story when a child and Aesop’s fable, the story of the fox and the lion, he took the time to align himself with Rolls-Royce and Bentley and this helped him to grow.

By aligning with well-established luxury brands Laban Roomes: Goldgenie was able to borrow their credibility to make the Goldgenie brand more credible.

Celebrity endorsement is massive for building your brand and the authenticity of your business comes through in what you do.

“My character and passion for the brand has made the brand what it is today and there is always an intrinsic energy and leadership skills does he have and I like to think Goldgenie is a product of that.”

We also discussed our course and how giving back is part of our ethos, part of his company is called bling with benefits. and he designed a range of iPods for Elton John’s charity and with other charities with iPods signed by Frank Lampard.

“It is not luck when we succeed at work, this is the key takeaway, it is about hard work, vision, trying your best, with passion and determination, leading you to becoming lucky or blessed. It comes from energy that you are putting out.”

They also sell Franchises which is super exciting!

If you are looking to learn more about branding and storytelling these two posts and podcasts are worth checking out:

What is Your Story? Brand Or Fail?